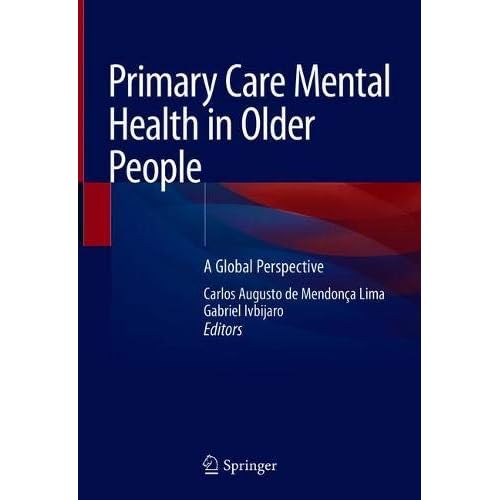 From the Back Cover This book is a practical resource that will support the delivery of holistic mental health interventions in the primary and community care setting for older people. Primary care delivery is discussed in relation to both functional mental health problems, such as anxiety, depression, and psychotic and personality disorders, and acquired organic mental disorders of old age, such as dementia, cognitive impairments, and delirium. Careful consideration is paid to the complex relationship between mental and somatic health problems, as well as the impacts of multimorbidity and polypharmacy. Further topics include, for example, epidemiology, wider determinants of health, different care models, history taking, neurocognitive and capacity assessment, and pharmacological, psychological, and physical interventions.The wider goals of the book are to support the development of community resilience and self-care in older people; to promote universal access and equity for older people in order to enable them to achieve or recover the highest attainable standard of health, regardless of age, gender, or social position; and to promote pathways to care for older people with mental health problems respecting their autonomy, independence, human rights, and the importance of the life-course approach. This book will be an invaluable resource for all professionals who work with older adults with mental health problems and those training in these fields including physicians, psychiatrists, family doctors, geriatricians, general practitioners, nurses, psychologists, neurologists, occupational therapists, social workers, support workers and community health and social care workers. Read more About the Author Dr Carlos A. de Mendonça Lima obtained his medical degree at the Federal University of Rio de Janeiro and achieved its equivalence in Portugal and in Switzerland. He specialized in Psychiatry at the Université de Franche-Comté, France. He subsequently completed a Master degree in Epidemiology and Statistics and another one in Clinical Pharmacology and Pharmacokinetics at the University of Nancy I, France. He is Doctor in Sciences of Life and Health (PhD) by the Université de Franche-Comté, France. He was a consultant of the Mental Health Division of the World Health Organization from 1992 to 1998. He helped to create the WHO Collaborating Centre for Psychiatry of the Elderly in 1996 and he was its director from 1998 to 2004. He was president of the European Association of Geriatric Psychiatry between 2003 and 2004 and he was Member of the Board of Directors of the International Psychogeriatric Association from 2004 to 2012. He was Vice-Chair of the European Psychiatric Association Section of Old Age Psychiatry from 2004 until 2010 when he was elected its Chair, a position he held until 2014; until today he is its Councilor. In 1999 he became member of the board of the World Psychiatric Association Section of Old Age Psychiatry and in 2008 he assumed its secretary, position that he still stands today. He assumed clinical, teaching and research positions in 4 different countries (Brazil, French, Portugal and Switzerland) and today he has the charge of the Unity of Old Age Psychiatry at the Centre Les Toises, Lausanne. He also has intense clinical activity together with Primary Care Doctors of a rural area in Canton of Vaud, Switzerland.Professor Gabriel Ivbijaro is Visiting Professor of Population Mental Health at NOVA University, Lisbon, Portugal and a specialist in Integrated Care and Primary Care Mental Health, with expertise in service re-design. He co-edited ‘Integrating Mental Health Into Primary Care: A Global Perspective’ in collaboration with World Health Organization and World Organization of Family Doctors in 2008 and has participated in a range of mental health transformation projects including being the Royal College of General Practitioners representative on the Royal College of Psychiatrists Intercollegiate SOC Committee that produced the ‘Good Practice Guidelines for the Assessment and Treatment of Gender Dysphoria’ in 2013. He was a Member of the European Platform for Mental Health from 2008 to 2009, London Regional General Practice Adviser for the Improving Access to Psychological Therapies Programme from 2010 to 2012, Chair of the Long Term Mental Health Conditions Clinical Expert Panel for NHS London from 2010 to 2012 and Clinical Chair for Waltham Forest Federated GP Commissioning Consortium from 2011 to 2013. Professor Ivbijaro has presented papers and original thinking on primary care mental health integration and collaborative care at many local and international conferences and has published a range of articles in peer reviewed journals. He was editor of the ‘Companion to Primary Care Mental Health,’ an international collaboration of 110 authors from all continents of the world which received a five star (100%) Doody’s Review and aims to promote access and delivery of evidence based practice in primary care. His PhD ‘Stigma and social distance for schizophrenia in psychiatrist, general practitioners and service users’ highlights some of the challenges that mental health patients face when accessing health services due to stigma and discrimination.  His contribution to the UK National Health Service was recognised in 2012 when he was awarded an MBE (Member of the Order of the British Empire) by her Majesty the Queen. Professor Ivbijaro is an International Distinguished Fellow of the American Psychiatric Association and Chair of the APA Caucus on Global Mental Health, a Wonca Fellow, a member of the American College of Psychiatrists, Chair of the World Dignity Project and Immediate Past President of the World Federation for Mental Health. Read more