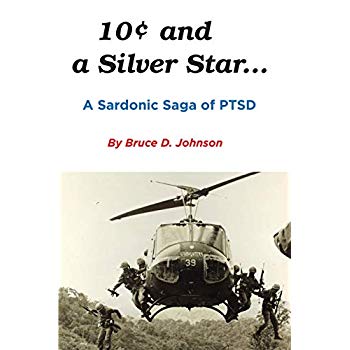 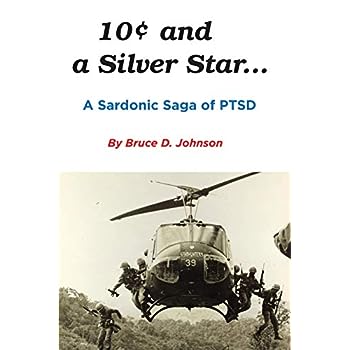 Review When I was growing up, and still to this day, I loved to watch M*A*S*H and Bruce D. Johnson has captured a similar vibe with a humor similar to the famed TV series. If you were to bring Hawkeye into a more modern context, this would be a very close result. The humor was great . . . Bruce D. Johnson has written a completely original and penetrating perspective of America’s involvement in the war in Vietnam. A good story; I loved reading it. This book deserves a bright 5 stars for being a fine book and an addition to original prose as the mirror of its times in its genre.. — Reviewed by K.J. Simmill, award-winning British author with books released in both the fantasy and non-fiction genres. Part humor, part snarky sarcasm, 10 Cents and a Silver Star by Bruce D. Johnson is the tragi-comic memoir of a Vietnam veteran. Bruce’s maxim is, ‘It’s better to laugh than cry.’ His book is a testament to his sense of humor as he grows into manhood during one of the world’s most confusing and senseless wars and beyond. Spiked with (at times, sardonic) humor, and many heartwarming incidents, this book will take you on a unique journey through the depths of the hazardous Vietcong jungle, to the mad jungle of Chicago as the author learns how to curb his bitterness and heal the scars of the war. What better way to mend than with humor and penning a great novel?–Reviewed by Alyssa Elmore, one of the most prolific reviewers at 287 reviews and counting. Considering that over half a million fighters returned from Vietnam with PTSD, this single story says a lot for the ones who kept their heads down and attempted to return to normal life. Author Bruce Johnson plays out the trivialities of normal life really well with his protagonist’s sharp and often wicked sense of humor, turning everything to comedy to spare himself any pain. The narrative is brilliantly done and consistent, never removing us from our privileged position in the narrator’s head, keeping us close to both his horrible flashbacks and his witty observations on civilian life. The jokes are naturally placed and not over-saturated, and I found a true emotional quality beneath the text that really made my heart melt. Overall, 10 Cents and a Silver Star: A Sardonic Saga of PTSD is a must-read for fans of post-war drama.–Reviewed by K.C. Finn, author of more than a dozen published novels. Bruce D Johnson’s 10 Cents and a Silver Star is an extraordinary narration of what soldiers encountered during the traumatic war in Vietnam, and after. From the very beginning of this momentous story, perhaps as momentous as Joseph Heller’s Catch 22, tossing convention out of the window, the author lays bare the scars indelibly imprinted on the psyches of soldiers thrown into the quagmire of a war in Vietnam that was not theirs to fight . . . Bruce D. Johnson has written a completely original and penetrating perspective of America’s involvement in the war in Vietnam.–Reviewed by Deepak Menon, a poet and an author of more than 18 books across genres, including Science Fiction, Fables and Tales for Children, published in five languages. Read more From the Back Cover 10¢ and a Silver Star…A Sardonic Saga of PTSDJust as WWII gave us Catch 22and Korea produced M*A*S*H, Vietnamdelivers 10 cents and a Silver Star.No one can laugh off the incredibly cruel Vietnam War, but BruceJohnson’s sardonic antidote to the plague of PTSD helps recover the truth – ifyou don’t laugh, you’ll cry.An unworldly young man volunteers to be drafted early. He ventures intothe essence of an old combat adage: Waris long periods of boredom punctuated by moments of sheer terror. His lifeis devoured by terror cloaked in outlandish humor.A tough fatherly sergeant orders him to lie low in filthy muck asgunships rip into ambushing enemies. He lives another day, one day at a time,for 13 endless months. It’s never over for the young man who came home with asardonic ‘attitude’ and a Silver Star for valor. It’s not even his.PTSD (Post-Traumatic Stress Disorder) is spun into a dazzlingly humorousmontage of survival over decades of recurring flashbacks. He’s just one of 500,000U.S. individual PTSD afflictions, each different, but Bruce’s attitude weaves alasting humorous tale of a civilian ambushed by war. Read more